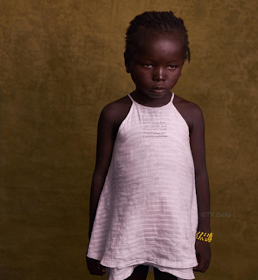 Ace photographer TY Bello recently returned from
a 6-day visit to Borno State where she spent time
with soldiers, civilian JTF, volunteers and Internally
Displaced Persons. She saw for herself the
unparalleled destruction Boko Haram terrorists
have brought upon the people living in that area and has been sharing photos/stories to educate
people on the problem some Nigerians in the
North are facing. This is from a photo session she
had with a child who has “seen things she
shouldn’t have”. Read what she wrote below…

“I woke up at 3am and for some reason I
started to stare at one of my sons .I
changed my angle a little and in the dark ,it
seemed his face had morphed into that of
little Ba’aye ,the first girl I photographed at
one of the camps .I don’t know if it’s because Ive found it difficult to get good
sleep since I started making these images
or simply because they both have rounded
foreheads but It’s amazing how children
look alike .

But then it came to me .. That look on her
face .. I’d never seen on anyone her age
..this little girl had seen things she shouldn’t
have !! Visions of her kept me awake ..she
just stared harder and harder at that corner.
When asked if she remembered anything about how she left her home in Bama she
strongly affirmed ..”I don’t want to go back
home “. When asked why, she replied ..”It’s
not a good place”.No matter how different
children’s personalities are.. They really are
just big babies .. the 2 to 4year old living through this crisis isn’t blessed with ‘special
‘powers to ‘handle it’.

I tried to put my sons in the context of
everything that has happened in Borno and
it became even clearer to me how broken
and terrified she and countless others must
be .Children are children and War is
Wrong.Whats more wrong is having a narrative about the situation that leaves
them out …We must remember the children
.They need us to . #tybellophotography #
portrait #internallydisplacedpersons #
Nigeria”