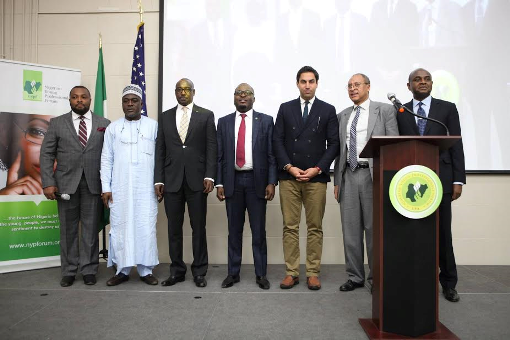 “Things have to start getting better and for things to get better, our voices must be heard. Today’s event is not about pointing accusing fingers; we are here for prospects and solutions only. How does the government create an enabling environment for the country to thrive? If the country is headed in the wrong direction, there are capable Nigerians that can lead the country back to the right track, the government owes it to the nation to get competent hands to run the economy.”

This was the opening statement made by Mr. Okenfe Liberty, the U.S Coordinator of the Nigerian Young Professionals Forum (NYPF). The NYPF, a Non-Governmental Organization composed of over 3 million young Nigerian professionals globally with chapters in fifteen different nations, held a summit that gathered from all over the world, a critical mass of these young Nigerians to New York on September 24th concurrently with the United Nations General Assembly UNGA, with the theme “X-raying the current Nigerian Economic Challenges, Foreign Policy, Prospects and Solutions”.  It is obvious that this group of young people meant business when they decided to orchestrate the gathering of their leaders for what they labelled as Real Dialogue.

This gathering was not in isolation; the United Nations got involved. Described as a moment of challenge and opportunity for the human family, the UN Secretary-General Ban ki-moon in his speech presented at the summit on his behalf by his special Envoy on Youth, Ahmad Alhendawi, the Secretary-General stated his confidence in Nigeria, that the nation as Africa’s largest economy and most populous country can show its continent and the world that it is possible to achieve sustainable development and leave no one behind.

He has urged the Nigerian government to take the primary responsibility in delivering the sustainable development agenda to its citizens and to get young people involved, engaged and equipped with the ambience to lead the charge in other for a sustainable society to be built, this he says is part of the global call for sustainability and partnership. This is the first time in history that the United Nations is getting involved at such capacity; certainly, the very first in the history of Nigeria that a UN Secretary-General is sending a strong message through a forum organized by young Nigerians.

Nigerian Leaders present at the summit to engage in the Nation’s solution discuss included Governor Abubakar Sani Bello of Niger State, Prof Pat Utomi an Economist and Founder/CEO at Centre for Values in Leadership (CVL), Prof. Kingsley Moghalu, Former Deputy Governor of Central Bank of Nigeria, amongst other leader attendees.

Nigeria has an estimated 37million micro and medium size enterprises (SMEs) which contributes to the GDP and employment.  This SME sector is the engine that drives the economy, a key ingredient that could carry the country through these who went on to suggest his ideas for the economic solutions, such as the tough times.
With the recession hitting hard, SMEs are aware consumers don’t have as much money to spend while investors and partners reduce investment.

“It is pivotal that the government show critical support for this sector if Nigeria is to relate effectively to the world”, said Mr ChimaAnyaso, the NYPF South East Regional Chair recovery of Nigeria’s over $100B abroad, lowering of interest rate to promote SMEs, whom he says are employers of 80% of the nation’s labor force, and promoting goods made in Nigeria.

“A lot of us Nigerian Young Professionals are boosting the other countries with our exceptionalism,” Mr. Moses Siasia the young 36-year old founder of the summit organization NYPF said in his remarks.  “I met a 27 year old Young Nigerian living in the UK , an aeronautic engineer, I have also met a 26 year old young man in the U.S, a robotic/robotic engineer.  Nigerians are exceptional abroad boosting the economy of different countries, but our own country lacks. Moving back to Nigeria is important and we cannot keep playing the blaming game. The NYPF is one of the platforms to bring the solutions  required, but imagine if every young Nigerian professional came together to contribute their own quota towards nation building, I believe that we will be a great Nation again. You must contribute your own quota,”  Mr. Siasia said, “and that is what we are advising young NIgerians around the world to do towards the development of the Nation.

These solutions discussed from this summit will be presented to the Nigerian President Buhari as a report,”  Mr. Siasia concluded.

Prof Pat Utomi, the international Economist, gave an almost thirty-minute lecture under the title Between The Demographic Dividend and Despair of an Oil Economy”. He highlighted that the youth bulge the nation is facing can be a threat or an opportunity depending on the sort of environment the nation presents this bulging population with; he says that the challenge the nation faces is that of how to harness the demographic dividend versus the oil mindset in the current crisis.

“Young people can make a huge difference in the fortune of any country,” he said.

His speech highlighted a crisis of confidence in Nigeria. Addressing the privatization of national asset, he says that national assets becoming private assets has led the country nowhere. His proposed solution to the economic crisis suggested that

“Nigeria must look at moving into areas where it has strong factor endowment in which we can become competitive along the global value chain.  Every part of Nigeria is endowed enough to become globally competitive,” stating that the production of Rubber as part of the agricultural sector is an example that should be considered.  “Nigeria used to have the best yield per hectare of Rubber in the world,” he said. Oil made us lazy, he emphasized. As part of his ideas, he also suggested for the Nation to create wealth that is diversified and takes from the challenge of oil debate, and to also manage solid minerals effectively so that the nation does not fall into the same problems they have encountered with oil.

The former Deputy Governor of the Central Bank of Nigeria, Prof. Kingsley Moghaluanalyzed some key points on how the nation can arguably get out of recession. His prognosis is that in the second half of 2017, if the 2017 budget is effectively and efficiently developed and executed, an impact will be seen due to the money that will be pumped into the economy more in the first half of 2017.

“Very likely, even then the nation will not get more than 2% economic growth,” he said, also predicting that it is in 2018 and 2019 that the nation will see the results if the right things are done now. “The right things,” he stated, ”includes implementing a muscular fiscal and structural policy, changes in FOREX policy management and gaining economic confidence which comes by an effective monetary policy, which  will follow only after the fiscal and structural policy is fixed.”

With inflation being at 17%, this former CBN governor says that even if the CBN reduces the interest rate, the economic situation remains until there are structures in place citizens can begin to rely on. Central banks came out of recession through low interest rate, but only with good policies in place.

The CBN deputy governor emphasized that the number one responsibility of an economy is to create wealth and prosperity for its citizens.

“Poverty is the reason for discrimination,” he says. “America really wants you to visit, with your money, but when you are poor, some candidates will use you for campaign”, he joked.

“Having a world view will do Nigeria good,” he highlighted, stating that countries’ economies are driven by a world view; a sense of the future, of the value system that must undergird our society and everything we want to do.

“We want to be a major power in Africa and our demographic advantage can take us there, but we would need to have a strategy that is deliberate and a plan for the future. This plan cannot include short term plans like selling of national assets to get out of the recession. The sale of national asset cannot be done as a shortcut measure to get out of recession; it will be done badly, he emphasized.

The former deputy shared a ton of idea solutions that he assured is the way out of the current troubled state, from quality spending by every naira spent contributing to an increase in the GDP per capita to expanding internal revenue base for an inclusive growth and Laissez-faire economy; the deputy held nothing back.

One of the youngest Governors in Nigeria, Abubakar Sani Bello of Niger, was given a NYPF award for his outstanding economic agenda for Niger State, presented by the UN Envoy on Youth, Mr. Alhendawi.

The Envoy who had just returned from a visit to Nigeria said that the Nigerian young minds are thirsty to be heard and that investing in the right policies will lead to transformation.  He also announced the UN global campaign Not Too Young To Run, stating that more young people need to be in leadership positions,. This campaign, he says, encourages government to think of their youth and not only to work for them, but with them as the only way forward.

“If young people are in entertainment and Arts, then why can’t they run for office in politics so they can be at the table and heard? The largest interaction the UN has in the world, according to their database, are with Nigerians,” he says, adding that working with young people is the big public secret to transformation and we all know it.

Many young attendees, when interviewed about what they thought of this gathering and about the future of the Nation, said the NYPF platform is great to come up with solutions and stated that the timeliness of this event couldn’t be more appropriate.  Several stated that they felt empowered and on board to work with the Nigerian government and the private sector (Public Private Partnerships) to seek out innovative solutions in their own diverse skills.

More photos from the summit below… 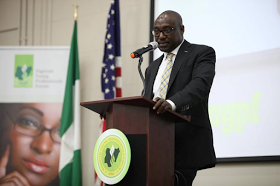 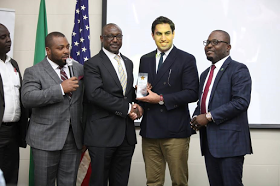 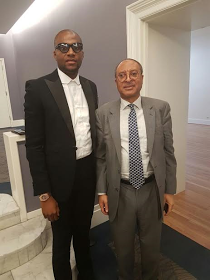 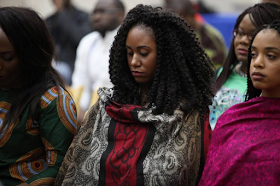