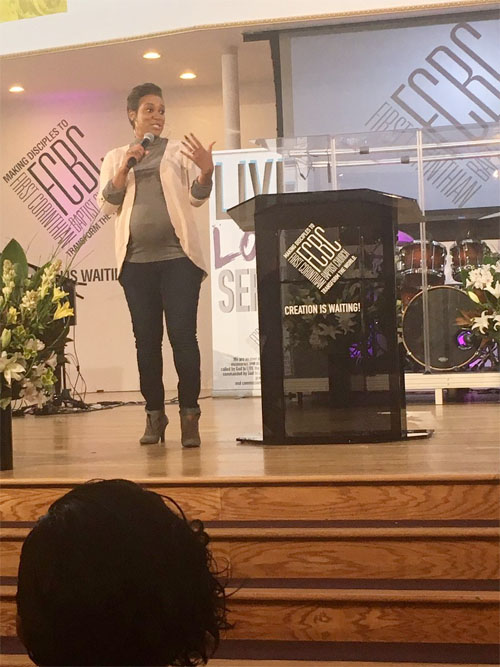 Last month, American Pastor Desiree Allenput up a post on her personal website Not Cinderella. The post was titled “On Being a Pastor and Pregnant (and Why I Can’t Carry Your Weight)” and in it she revealed that she is unmarried, a Pastor and pregnant.

Her post details how she has been dealing with all the criticism and negativity and how there’s a double standard when it comes to sex outside of marriage.

In a lengthy post, Pastor Allen who is currently engaged, shares that she will not be shamed out of doing what she loves – preaching.

I found out I was pregnant at the happiest place on earth. It was Mother’s Day and I was on vacation at Disney World. Go figure. I noticed my normally regular period hadn’t come which is usually no biggie. I would chalk it up to stress. Except now, thanks to acupuncture, I was used to it coming like clockwork. It’s only day one I told myself. It’ll come tomorrow. And it did, but only stopped by for a brief visit before disappearing into the abyss. I waited for her to come back. She never did.

The next day, I did what any normal sane woman would do. Scoured the resort for pregnancy tests like a madwoman. I went to every store on my resort AND the sister resort. Not a test in sight. No not one. How is this the happiest place on earth and you not expect people to get pregnant or need a pregnancy test? How do you have the mind to have a chip at the bottom of my cup that electronically determines how many more refills I have at the soda machine, but not sell an EPT Pregnancy Test? Or at least a Disney knock-off brand. I wasn’t giving up. I went to the front desk. They always have extra shoelaces, cans of beans or whatever you need. Maybe just maybe they had a pregnancy test. Nope, but the lady at the front did discreetly let me know there was an offsite pharmacy that would deliver these “sorts of things” to the resort for a fee. She slipped me the card like she was passing me a bag of weed and k2.

Was I really this desperate? You know I was. I placed the order and waited for a test to confirm what I already knew.

I was pregnant. My immediate reaction was shock. This was not planned. Yes, I know it’s a potential consequence of having sex, but not one readily expected. With the exception of living a pretty much celibate lifestyle in my twenties I had been having sex on and off since I was 15 and had never been pregnant. In fact, I assumed when I was ready it would be very hard for me to conceive. Boy did I miscalculate that.

After the initial shock was joy. Yet, underneath something else was lingering. Anger? No. Disappointment? No. It was pure and utter dread. Not at being pregnant. Not at whether or not I would be a good mother. What had my stomach turning, other than nausea, was me being pregnant AND a pastor. Let’s face it. The church has not had a good track record of accepting unmarried women who got pregnant. If you’ve been in church for any period of time you’ve heard or witnessed the aftermath. Shunning, slut shaming, being sat down from your position, having to go up in front of the church and confess your sin, etc. etc. No one can be naïve enough to say this type of stuff doesn’t happen in church. An ugly truth is people in church leadership have sex outside of marriage, affairs, do drugs, drink, so on and so forth. Generally, these are not considered acceptable acts. BUT I have seen many churches turn a blind eye to this behavior, because it can be hidden. Don’t ask. Don’t tell. To be pregnant is a very visible indication of a private act and for some reason provides people with more of a need to respond.

You may as well Scarlet Letter it up and place a big ole S on your chest for sex Hester Prynne style. “The church” is already harsher on women for their “crimes,” but being a pastor also meant that both me and my fiancé were going to go through this publicly. I didn’t know what that meant, how it would affect my job and if I was prepared to deal with it.

Pregnancy already inherently diminishes some anonymity as people feel it their right to invade your personal space, offer up unsolicited advice and ask you private questions. Pastorship inherently makes some feel your personal life is their public business as you lose some sense of individuality for the sake of belonging to the church. As a pretty private person I had always struggled with the latter. Adding pregnancy seemed like my worse nightmare.

It was not as if I had a blueprint for this in my church. My pastors had been very open about having their first child while unmarried in college. That was more than 20 years ago. They were young. None of us were there. They were not pastors then. It was in the past enough to be hazy memory and turn into a testimony. Many of us know the struggles we have had in the past. For many, it’s what brought us to church. Yet, as soon as we get far enough away from our struggles to label them “redeemable” or for them not to be in the forefront of our minds it becomes much easier to give someone else the side eye for behavior we don’t agree with. It is often easier to NOT afford others the grace we were so freely offered. I had experienced people judge everything from my clothing to social media posts fully aware that if it had been another pastor they would’ve gotten a pass. My apprehension was not unwarranted and although privately excited I was concerned about public persona. I did a lot of wrestling that week. I came to grips with the reality that part of the monster in my head was created by me. My past. My upbringing. What I was taught about the bible.

I realized I had some baggage and I wanted to deal with this pregnancy on my own terms regardless of how people felt or responded. In those first few months I decided I couldn’t carry the weight of others’ opinions and judgments including my own. I also had to confront the ways in which I judged others based on their decisions and actions. I decided I was going to walk with my head held high, because I was proud and excited to be pregnant. Often, when people think you’ve done something wrong or have sinned they want you to walk around with your head low in guilt. Otherwise, how would THEY know you were sorry? Well, I wasn’t sorry or ashamed. Shame and happiness cannot reside in the same place. I decided to only surround myself with those who had positive energy. I knew there would be rough days, but I also knew the good would outweigh the bad. So when the first comment was made about my pregnancy being an abomination I wasn’t bothered, because it wasn’t MY truth. Plus who uses abomination anyway? Can we say antiquated?

I had a choice on how to define my own happy and write my own story. I thought about the women who were belittled in their churches for being pregnant. The women who felt abortion was a better option than humiliation. The girl or young women of a pastor forced into abortion, because the family couldn’t handle the shame. The woman who left the church permanently because the members couldn’t accept her child. The woman who watched the same people who loved her each Sunday avoid her like a plague. The woman who would give up everything to be pregnant regardless of the circumstances and still finds her womb bare. So many women who may have made a different choice if they understood the power they had. If someone had told them, it was ok to make the best choice for them ignoring the outside voices. It would get better. They could outlive this. I understood what some people thought, what some scriptures said, but also the validity of my own experience.

At three months I revealed my pregnancy to the staff at my church. It wasn’t planned. It was at our annual staff retreat. If you could see inside my mind you would have seen the warring back and forth.

“What? Are you crazy? This is not the time.”

“It may not be your timing, but it IS the perfect time.”

“Well if you wanted to wait you shouldn’t have worn that dress. Come on. It will be like pulling off a Band-Aid. Have this conversation once and you won’t have to have it again.”

“You’ll be fine. The outcome will be better than expected.”

The words kind of fell out of my mouth in front of everyone. I explained my joy and the importance this did not undo and diminish all the work and dedication I had put in for six years. I felt empowered. I shared what I wanted to share, how I wanted to share, own my own terms. I wasn’t responding to anyone or defending myself. I was standing in my truth. In a moment I will never forget, our executive pastor had  the staff encircle around me and they begin to pray. A noise that can only be described as a wail left my mouth and I broke. To the point of needing a chair to sit in. I broke in the most beautiful way possible. In the breaking I was free. That ugly Jesus cry released every anxiety, fear and worry holding me down. They promised to protect me and support me. In that moment I saw God. It was a moment that transcended boundaries or judgment. It was pure love. I felt free.

One of my favorite lines from The Scarlet Letter is: “She had not known the weight until she felt the freedom.” I was carrying a lot of weight and baggage. The weight of what if. The weight of my upbringing. The weight of others’ opinions. The weight of judgment. It was heavy and I did the hard work of dropping that weight. I have no plans of picking it back up.

So no, I cannot carry your weight about MY situation. Whoever you are. I have my own beautiful, amazing and miraculous weight to carry for the next few months and a lifetime.

Photos found here and here. Preaching photo from September 2016 taken by Eddie Sparkman. I was 5 1/2 months pregnant. I have preached throughout my pregnancy and will do so until I can no longer waddle on the stage.