US and N. Korea Tension Could Lead To Conflict That Wipes Out “large part of humanity” – Pope Francis 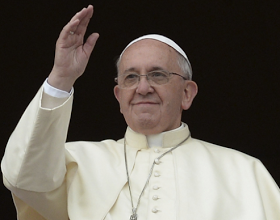 Pope Francis who is currently on a visit to Egypt has said he worries that the rising tensions between the United States and North Korea could lead to a wide military conflict that would wipe out a “large part of humanity.”

He called for renewed diplomacy using third-party intermediaries and for the United Nations to take a lead role in de-escalating tensions.

the situation has heated up too much. I always appeal for a solution through diplomatic means. It’s piecemeal but the pieces are getting larger, and are concentrated in places which were already hot. Today a wider war would destroy, I won’t say half of humanity, but a large part of humanity and culture. It would be terrible. I don’t think humanity today could bear it.Diplomacy is th