US Secretary Of state Criticized by CAN For Visiting Sultan 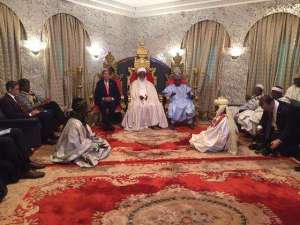 The Christian Association of Nigeria (CAN) has criticized the United States of America (US) Secretary of State, John Kerry over his visit to the Sultan of Sokoto.

The religious association, slammed John Kerry for
not meeting with any Christian group when he came to Nigeria on Tuesday, August 23, 2016.
CAN accused the United States of Ameria (USA) of plotting to create religious and ethnic divisions, following Kerry’s visit to the Sultan of Sokoto, Sa’ad Abubakar, who happens to be the head of Muslims
in Nigeria.

According to reports, the association also accused
the US Secretary of States, of using his visit to the Sultan to encourage the Federal Government’s agenda of persecuting Nigerian Christians.

According to the President of CAN, Rev. Supo Ayokunle, Kerry’s “lack of respect for the
heterogeneous nature of Nigeria, amounted to
favouring northern Nigeria and Muslims to the detriment of the Christian community.”