Video: Catholic Priest & 200 Others Held Hostage By ISIS In Philippines 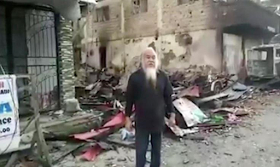 A Kidnapped Catholic priest who is been held hostage alongside 200 captives, including children, by militants linked to ISIS in the southern Philippine city in Marawa, has appeared in a video pleading for help. Fr. Teresito ‘Chito’ Suganob, a Catholic priest in Marawi, Philippines, was kidnapped last Tuesday night along with at least a dozen worshippers and church workers.

In a video released Tuesday, which was allegedly taken under duress, Father  ‘Chito’ said his captors wanted the military to withdraw its forces from Marawi, where Islamic militants have dominated following the ongoing gun battles with the army.

Mr. President, please consider us,’ Fr Chito said while standing in front of debris and partially burned buildings. He continues:

“‘They don’t ask for anything… they just ask that you leave this place peacefully. We are in the midst of this war we are asking your help to please give what they are asking for.”

‘We want to live few years and in your generosity, Mr. President, in your heart, we know you can make something. ‘Along with us are about 200 carpenters, household helpers, children and youth, and ordinary Christian settlers,” he said

CBCP News, the official news service of the Catholic Bishops Conference of the Philippines, said it was unclear when the video was taken, but it does show Fr Chito amongst destroyed houses.

In a telephone interview, Marawi Bishop Edwin de la Pena confirmed that it was Suganob in the video.

“I was glad to see that he is alive but we were also saddened because the fact that the terrorists are ready to negotiate means they are pressed against the wall and they are also desirous to get away from the situation and their bargaining chip are the hostages,” he said.

Watch the video after the cut….