WATCH: Suspect ‘Wizard’ Reportedly Lands In Edo Church After A Night Of Battle 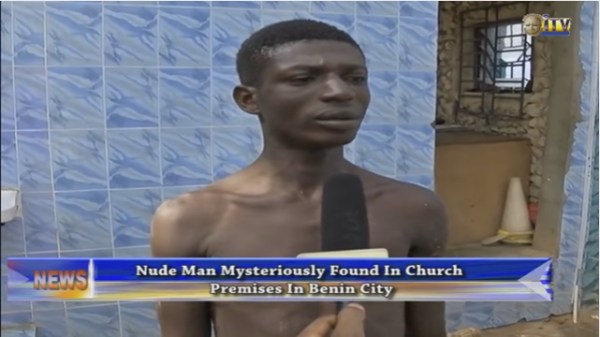 Church workers of City Gate Ministries, Benin, Edo State, were thrown into confusion, as they resumed to discover a nude man within the church premises which was reportedly locked at the close of work in the previous day.

The man, who looked unkempt and had a fracture in his right knee, said he came from Agbaru in Delta state.

The Spiritual Leader of the church, Prophet Ojo Agge, said he was shocked when he woke up to discover a naked man in his church. “

“Suddenly, this morning (Monday), he was found inside the premises. He said that he came
in from Agbaru, the spiritual world. He got to Ring road and hovered, according to his words.

He told me that he battled and battled. So from that battle, he did not know how the spirit carried him.

As he was crossing this place, he landed and he could not go out anymore. He said that since he was in the house of God, he was ready
to surrender,” Agge said.