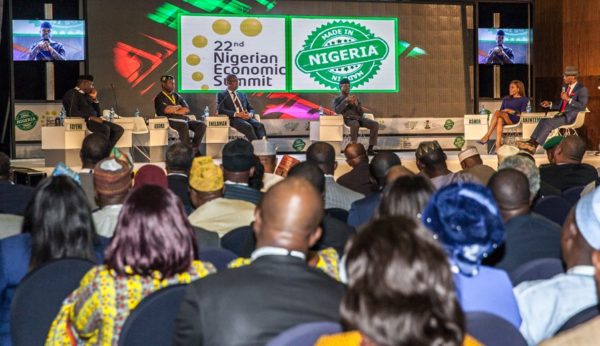 Nigeria’s Vice President, Professor Yemi Osinbajo, on Monday, said that the country had the best opportunity now to turn its economy around.

The vice president said this during policy dialogue at the ongoing 22nd Nigerian Economic Summit in Abuja.

He said “we have the best opportunity for now to turn this country around; I think that without a doubt, we have some of the most committed people now.”

“The President is committed, the President is honest, obviously one that can be trusted and relies on very competent people he has put together. I believe that in taking this important opportunity for the country, it can only be with the active collaboration of the private sector,” he added.

Osinbajo added that everyone had a role to play and all must come together to make the nation work.

He declared that every member of the President’s cabinet was determined to ensure that they turned
the country around for good.

“There is determination to incrementally make things happen day-by-day. Sometimes, we may not be getting it right, sometimes it may be wrong and Nigerians are extremely engaging and they tell you that you can’t go wrong for too long.’’

The vice president expressed gratitude that the interaction was taking place “because this is not about anyone or any government; it is about our country.

“All of us should commit to working together to make these happen for our country.’’

He noted that the administration initiated the N-power project to bring in 500,000 graduates to work in the areas of teaching, public health and extension farming.

He added that the plan was to utilise technology to train people, adding that government was investing heavily in that sector as part of its social intervention scheme which was a N500 billion government policy.

On food security, he said government appreciated that there would be bumper harvest this year which could lead to drop in prices of produce.

Accordingly, he said, the federal and state governments were collaborating to build and operate many silos across the country for storage.

“We have a minimum price guarantee scheme and the Ministry of Agriculture has suggested that there will be a buy-back scheme. We are committed to silos and buy-backs because without them, the storage of farm produce won’t work.’’

“We have already provided our counterpart funding to the loan that is coming from China; we are concessioning the existing routes to General Electric.’’

He said investment in rail was important because some of the nation’s roads deteriorated because of haulage of heavy duty items on the roads.

The vice president described the recession in the country as peculiar because of the lack of power caused by sabotage in supply of gas to the turbines.

He said the sub-sea pipeline project being undertaken was important “to avoid the temperamental nature of Niger Delta where today, there is peace and tomorrow people are blowing up the pipelines.’’

He noted that the administration was quite focused in its projections for power but acknowledged that there were a few problems in the power sector.

Osinbajo, however, expressed the hope that gas supply would stabilise but that the administration was also investing heavily on solar and other renewable energy sources.

“We have about 1,600mw of power projects coming from solar onstream,’’ he said, adding that the country had no choice but to use solar because of the abundance of sun in most states of the federation.

He also said that the administration was working on improving the River Basin Authorities and improving on the hydro capacity of the dams in the river basins to boost power generation.