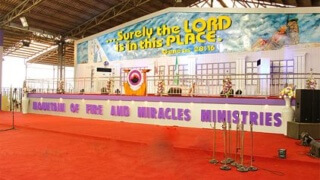 The General Overseer of Mountain of Fire and Miracles Ministries, Dr. Daniel Kolawole Olukoya, on Saturday disclosed that ‎crusade and camp ground site of the church in the Ogun State section of the Lagos/Ibadan Expressway, known as Prayer City,” was legally acquired.

Olukoya said it was bought from the Ogun State Government, the original owner of the land.
Olukoya made the disclosure at the monthly prayer meeting of the church, popularly known as “Power must change hand”.

He ‎added that the church is in possession of the Certificate of Occupancy of the land.

According to him: “We have been on this land for the past 18 years.
“We have the Certificate of Occupancy from the Government of Ogun State.
“The land was bought twice.
“We bought it from rightful owner and the Ogun State Government (OPIC).
“Another set of people have come now that they are the real owners of the land.”

Dr. Olukoya told members of the church to relax because it is a dangerous thing to fight the church, adding that the legal team of the church was already addressing the matter.

An online publication had last week reported that MFM will lose its land following a court ruling of May 12 by Justice A. A. Akinyemi of the Abeokuta Division of the High Court of Ogun State.