We ‘re Working Hard To Stabilize Power Situation In Nigeria, Says Buhari 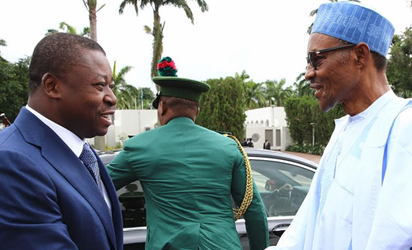 Press Briefing; President Muhammadu Buhari and his Togolese Counterpart, President Mr Faure Gnassingbe on a courtesy visit at the State House in Abuja.

The president spoke at a joint press conference
with visiting president of Togo, Faure Gnassingbe at
the presidential villa, Abuja on Tuesday.

Togolese president was in Nigeria to inspect the
ongoing refinery project by Dangote group in
Lagos.

President Buhari who revealed that the same
power problem was bedeviling Republic of Benin
stated that productivity would be competitive when
the situation improved.

He said: “They say seeing is believing. You can see
the efforts private investors are making. We are also
building pipelines but it is not as formidable as
what Dangote is doing. We are improving on it. We
also have the NLNG that is helping is to liquefy the
gas and then turn it into gas with modern technology and modern technology is making it
flexible.

“If we improve power which means our
productivity can be competitive and God willing, we
are going to achieve our objectives.

“We also discuss the unfortunate incidents in South
Sudan, Burundi. It is an agonising situation. Several
citizens are living under primitive conditions. We
hope at the AU meeting, we will be able to stabilise
the situation in South Sudan and Burundi with the
efforts being made.”

Also speaking, the visiting Togolese president said
he was impressed by Dangote’s string of
investment in Africa.

“If you want to promote trade, you have investors
that are very competitive and will contribute to
reduce import from non-african countries.

“I was told the gas pipeline that will be built will be
buried under the sea to make it. It means if you
want to promote blue economy, our ocean needs
to be very safe. We need security”, he said.