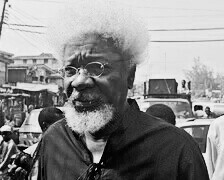 After threatening to do it a week before the US presidential elections last November, Nobel laureate Wole Soyinka has confirmed he has destroyed his green card because Donald Trump won.

Soyinka, the first African writer to be awarded the Nobel prize in literature, was jailed twice for his criticism of the Nigerian government during the 1960s, famously composing protest poems on toilet paper from his cell in solitary confinement. In 1994, Soyinka’s passport was confiscated by the de facto president Sani Abacha after he urged Nigerians to not pay taxes, as their money would aid the military. After years of living in voluntary exile and teaching overseas, Soyinka eventually sought refuge in the United States that same year, with the help of former US president Jimmy Carter. He later received a death sentence in absentia in 1997, from the regime under Abacha.

On 2 November, six days before the US election, Soyinka told a student audience at Oxford University’s Ertegun House that he would hold his own, self-described “Wolexit” if Trump won, and destroy his green card. “If in the unlikely event he does win, the first thing he’ll do is to say [that] all green-card holders must reapply to come back into the US. Well, I’m not waiting for that,” he said at the time. “The moment they announce his victory, I will cut my green card myself and start packing up.”

In an interview with the Atlantic on Tuesday, Soyinka confirmed he had followed through on his pledge to destroy his green card if Trump won as he celebrated Thanksgiving with his family in the US.

Soyinka, who has returned to living mainly in Nigeria since Abacha died in 1998, said he had made his green card “inoperable”. He did not expand on how he had destroyed it, but said: “I don’t have strong enough fingers to tear up a green card. As long as Trump is in charge, if I absolutely have to visit the United States, I prefer to go in the queue for a regular visa with others. I’m no longer part of the society, not even as a resident.”

Soyinka described the act as cathartic: “I delivered myself from uncertainty, from discomfort, from internal turmoil.”

In an interview with Nigeria’s the Interview magazine in November, Soyinka said he would destroy his green card in preparation for Trump’s inauguration on 20 January and that he “felt disaster in my marrow” as he watched the election results come in. “Trump’s wall is already under construction,” he said. “Walls are built in the mind, and Trump has erected walls, not only across the mental landscape of America, but across the global landscape