Wole Soyinka: To Everything, Its Place 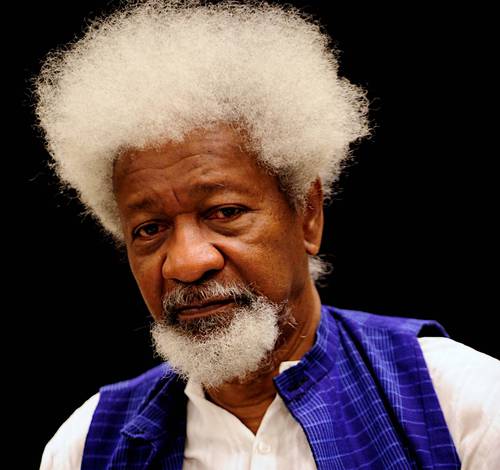 The issue, I understand, is the flaunting of
religious markers in public educational institutions. Let me begin by confessing that I envy
the French to whom those choices have only been
recently thrust to the fore – they have always been
with us in Nigeria. I also envy those to whom the
issues are straightforward, and permit of dogmatic
positions. In normal circumstances, perhaps I would agree that it should be a non-issue. It is
tempting to simplify the debate by evoking the
nature of club membership – a public school has
certain rules, and if you wish to be a member, or
make use of its facilities, then you must conform to
those rules or seek alternatives elsewhere.

However, the world we inhabit has changed vastly
and dramatically over the past few decades, and
club rules – like race or sex differentiated
membership rules – are no longer sacrosanct. In
addition, the genie is out of the bottle and the
beasts of intolerance, suspicion and polarization stalk the streets. Dialogue is mostly relegated to the
status of a poor relation of terror and intimidation,
barely tolerated, often mocked. Conscious of the
fact that the present dialogue is being conducted
within such an atmosphere, it may be helpful if I
began with a reference to my personal response when a directly contrary policy was announced in
my own country, Nigeria,  and not just recently. It
happened about twenty years ago, long before
the introduction of the Sharia – the Islamic law – in
a number of states within the country.

After several decades of independence, during
which the issue of school uniforms in public
schools never emerged as a volatile social
problem, I was appalled when a Minister of
Education ordered that secondary school pupils
should be allowed to dress in a distinct fashion that was favoured by their religious belonging.
What I experienced was, frankly, a deep sense of
revulsion at this insertion of a wedge
of difference among youth, at a period in their lives
when they should be saved from the separatist
imbecilities of the so-called adult world. My response was visceral and instinctive, and I
realized that this move had savaged a deep held
social philosophy within me that I had always
taken for granted.

The contributive effects of upbringing to such a
reaction cannot be ruled out, so let me also state
my own background. The schools that I attended
– both primary and secondary – observed the
tradition of the school uniform. The primary school
was an Anglican missionary school whose uniform – a khaki shirt, a pair of shorts and bare feet –
could not, by any stretch of the imagination be
attached to any religion – from the

traditional orisa worship of the Yoruba to
Zoroastrianism. My secondary school – or High
School as it is known in some parts – was a boarding school. On Sundays, Christian service was
conducted in the chapel while, on Fridays, Moslems
gathered for their devotion. On Saturdays, the
Seventh Day Adventists received an
automatic exeat, went into town for their version
of the Christian worship . Even Sunday devotion among the Christians  respected differences.
Roman Catholics as well as Pentecostal – known as
the aladura – went their own spiritual ways. In
short, although this school, a state owned school,
could be said to be basically oriented towards an
Anglican tradition, freedom of worship for every pupil was not only guaranteed but structured into
the school’s routine. The Minister’s claim that the
uniforms worn by pupils in the various secondary
schools were ‘christian’ was so specious that even
a number of his Moslems peers expressed deep
skepticism about his motives. Those motives are reflected today in the deep social cleavages that
have become exacerbated over time, and now
express themselves in religious clashes of
increasing savagery.

The basic question for me is this: what does adult
society owe its younger generation in a world that
is so badly torn by differences? Having observed
alternative examples in practice, and weighed
them without the burden of religious partisanship,
I find the model of my upbringing infinitely preferable to most others. It proposes that, while
the right of religious worship, even in schools,
should remain sacrosanct, society profits in the
long run from severely muting the overt
manifestation of religion in places of public
education. Now, I am positioning myself here on a platform of principle, not of details. We may find
that some religious augmentation of a school’s
dress code is not obtrusive, while others violently
blare forth!  I associate myself, basically, with a
policy of creating the maximum possible sense of
oneness within the younger generation. Allowance having been made for differences on
those days allocated to spiritual exercises of
choice, I see no harm done to the young mind
when it is thereafter bound with others in routine
expressions of a common identity, and that
includes, most prominently, the school uniform.

If we may approach this issue obliquely and push
aside religion for the moment, I should add that I
hold the same view of schools where absolute
freedom of dress is permitted school pupils. What
that has meant is that children from affluent homes
can attend school in designer clothing, forming associations distinguished by an elitist
consciousness, in contrast to the farmers’ and
workers’ children who can just about scrape
together the odd pieces of castoff dressing from
charity or second class clothing markets. A
simplistic reading of the rights of children to individual self-expression is responsible for this
takeover of the learning environment by fashion
parades, a sight that is so prevalent in countries
like the United States. My objection to this rests on
the recognition that the modern school is an
equivalent of the age-grade culture in traditional societies. There, the rites of passage from one
phase of social existence to the next, are bound
by rules that eliminate exhibitionism, and that
includes a strict dress (or undress) code. The
purpose of this is to create a common group
solidarity distinguished only by age and learning aptitudes, enabling the pupil to imbibe not only a
formal education but the sense of place and
responsibilities within the overall community. At
the heart of this strategy is purposeful leveling.
This is the one place, in a child’s life, where the
child can see the other as a human equal, as, very simply, another human being.

In a situation that involves a plurality of faiths, a
common dress code thus strikes me as a medium
of secular arbitration, a function that is thereby
vitiated by a blatant divergence from the uniform.
To revert for a moment to our own Nigerian
experience, the action of that Minister of Education in decreeing a duoform policy – as I dubbed it at
the time – in place of the uniform, was a denial of a
profound educational virtue in the personality
formation of our youth. That equipment is a
foundation block in the acquisition of the concept
of oneness, one that does not interdict the celebration of the pupils’ faiths with their families at
home, in places of worship outside the school, and
in religious season.

Six to eight hours each day, five or six times a
week, in a basically undifferentiated
companionship of their age group, a period that is
interspersed with huge spaces of vacation weeks
during the year, strikes me as being not too great a
sacrifice for parents to make, and I must stress that this ‘sacrifice’ is made, not by the children, but by
the parentage, the adult stakeholders who are so
obsessed with re-living their lives, with all acquired
insecurities and prejudices, through their
offspring. That sacrifice, or danger, exists only in
the parental mind, since no child loses his or her spiritual bearings simply from the removal or
addition of a piece of tissue or headgear from an
outfit for a few hours a day. Left alone, children
create their world. They should be
encouraged to do so. They re-enter another world
on returning home and again, left alone, harmonise both and others without any anguish.
In itself, this constitutes part of their educational
process, and makes their existence a richer one.

Learning includes cultivation of an adjustment
capability. I should add that I take this position
within the context of a situation where private educational institutions – which include missionary
owned schools  – are permitted. Such schools are
then free to decree their own modes of dressing,
but their curricula should also be routinely vetted
by the state – for reasons that I hope, are obvious.
Schools should never be allowed to serve as an instructional field for the curriculum of hate in the
young mind.

Boko Haram did not happen overnight. If I happen
to believe that youths should be weaned away
from any sense of class distinction through a
display of affluence in school, it is only logical that
the more insidious demonstration of religious
difference should be equally discouraged. ‘I am wealthier than you’, as an attitude among youth
earns our immediate disapprobation. Even more
binding an institutional responsibility should be
the attenuation of all buntings that, today
especially, leave impressionable youth with the
message: ‘I am holier than thou.’

In the name of whatever deity – or none – that we
believe in, leave these youths alone! Subject them
to a uniform character formative discipline. Don’t
give them airs – spiritual or material – and do not
fight surrogate wars through their vulnerable
being. If there is an after-life of well deserved “weeping and gnashing of teeth” called hell, it is
surely reserved for those who foster a mentality of
separatism in humanity at an age when the sense
of oneness, of bonding, comes instinctively,
effortlessly, and selflessly.