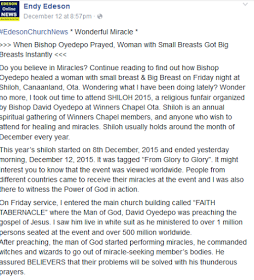 A member of living faith church Wrote on her facebook wall. She narrated how a
woman who had two unequal breasts had her
boobs realigned after being prayed for by Bishop
David Oyedepo at the annual Shiloh event. This
happened on Friday, according to Endy Edeson,  She said:

“On Friday, I entered the main church
building called “FAITH TABERNACLE” where
the Man of God, David Oyedepo was
preaching. I saw him live in white suit as he
ministered. After preaching, the man of God
started performing miracles, he commanded witches and wizards to go out of miracle-
seeking member’s bodies. He assured
BELIEVERS that their problems will be solved
with his thunderous prayers. Immediately
he finished his miracle prayers, he asked
members to come and testify.

Many members were healed, some were
healed of fracture, deafness, blindness and
bed-wetting but what I couldn’t figure out
up till now was a member who claimed that
her TWO BREAST wasn’t equal, One Breast
was SMALL while the other Breast was BIG.

As soon as Bishop David OYEDEPO prayed,
she received her miracle and the two
unequal breasts became 2 Big equal
breasts. Everyone shouted hallelujah, glory
be to God for such an unusual healing. They
thanked the God of Bishop Oyedepo for healing her.’