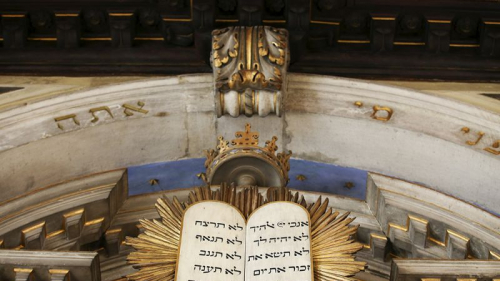 A 1,500-year-old stone inscription of the Ten Commandments, which was described as a “national treasure” of Israel, has been sold in an auction for $850,000 in California.

The two-foot square slab of white marble weighing about 115 pounds was sold in Beverly Hills, California, by Dallas-based Heritage Auctions, according to The Jerusalem Post.

The carving, inscribed in an early Hebrew script called Samaritan, was sold by Rabbi Shaul Deutsch, founder of the Living Torah Museum, in Brooklyn, New York, with the condition that the buyer must put it on public display, the post added.

The auction opened with a $300,000 bid, but a war between two phone bidders pushed the auction price to $850,000. The winning bidder does not wish to be identified.

“The sale of this tablet does not mean it will be hidden away from the public. The new owner is under obligation to display the tablet for the benefit of the public,”The Associated Press quoted David Michaels, Heritage Auctions director of ancient coins and antiquities, as saying.

Although officially deemed a national treasure of Israel, the Israeli Antiquities Authority approved export of the piece to the United States in 2005 on the condition that it be displayed in a public museum, a condition that still remains in effect.

The tablet lists only nine of the 10 commandments.

The commandment, “Thou shalt not take the name of the Lord thy God in vain,” is missing. The stone instead has an added commandment, which is often employed by the Samaritan sect, encouraging worshippers to “raise up a temple” on Mount Gerizim, the holy mountain of the Samaritans, located near the West Bank city of Nablus.

It was likely chiseled between 300 and 500 A.D., and was donned at the entrance of an ancient synagogue in or around the modern city of Yavneh, in what now is western Israel, the auction house said. The synagogue may have been destroyed by the Romans.

The tablet was discovered in 1913 during excavation for a railroad line near the modern city of Yavneh, according to the Post, which added that someone, possibly a construction worker, acquired it and set it in a courtyard where it remained until 1943 when it was acquired by an archeologist, who owned it until his death in 2000.