Paulo Gabriel da Silva Barros and Katyucia Hoshino were officially crowned the world’s shortest couple in London Friday. The duo both hails from Brazil and have been verified at a combined height of 181.41 cm (71.42 in), becoming world record holders of shortest marries couple, back in September after tying the knot. 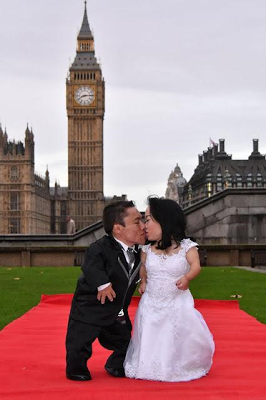 The couple who were measured by the officials of Guinness World Records In central London, Friday, had their record verified and confirmed at the GWR St Thomas’s Hospital in central London.

Paulo, 30, who is just 34.8in tall, has diastrophic dysplasia dwarfism while 26-year-old Katyucia, 35.2in in height, has achondroplasia dwarfism. They tied the knot in front of family and friends in hometown Itupeva, Brazil, and were presented to the media for the first time Friday. 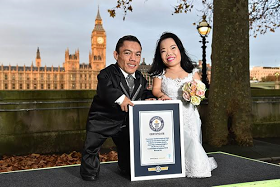 A red carpet was rolled out for them as they posed in their wedding outfits for photographs in front of London landmark the Houses of Parliament.

Paula and Katyucia first met in 2006 through a social media platform called, ‘Orkut’. 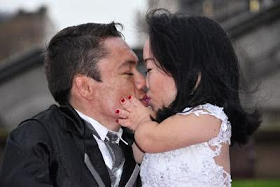 Speaking ahead of Friday’s celebration on the international record breaking day, Paulo said; ‘I found her very beautiful from the first moment I saw her.’ But Katyucia didn’t reciprocate Paulo’s love at first, she blocked him on the instant messaging site, before Paulo eventually won her heart afterwards. 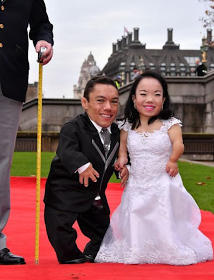 According to guinnessworldrecords.com, they chatted online regularly for a couple of years before they first met in person on 20 December 2008. They began dating on 29 December.

They maintained a long distance relationship for four years, managing to see each other every couple of months. In January 2012, Katyucia decided to move from her hometown of Londrina to Paulo’s town, Itapeva. They did not need to live together long before they knew they were meant to be together.

Paulo, a civil servant for his local government, and Katyucia, beauty salon owner, receive a lot of attention for their height, and not all of it was good. They found that being together attracted more attention – but equally, being together gave them greater strength in dealing with the attention coming from the public.

According to Paulo’s birth records, he was unable to walk until he turned 21 years old. 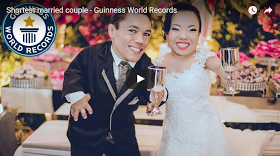 In an attempt to be more independent, he used a child’s tricycle to aid his inability to walk in his late teens, and upgraded to a four-wheeler when he turned 20. Having learned to walk and following the fitting of orthopaedic boots in 2008, he vowed to never use a child’s bike again – he then upgraded to a specially fitted out car which he still drives today. His colleagues know him as ‘Paulinho Gigante’ – Giant Paulo.

We are so happy to be a part of Guinness World Records Day and to have our unique record celebrated. We hope our new record will encourage the world to look past the physical differences in others and understand all people should be treated equally. We may be short but we have big hearts and lots of love for each other as well as everybody in our lives. Our life isn’t without its challenges but we are so happy we can tackle these challenges together.”