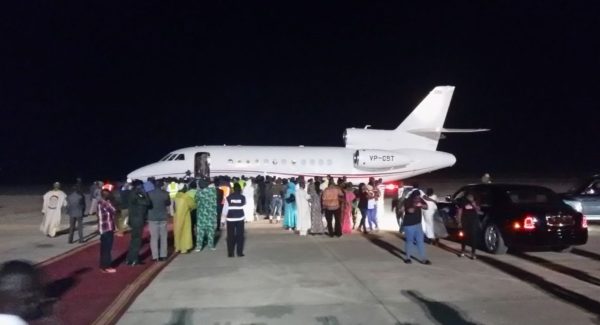 BANJUL, GAMBIA – JANUARY 21: Former president of Gambia, Yahya Jammeh, the Gambia’s leader for 22 years, waves to his supporters from the plane as he leaves the country, following the country’s presidential election, in Banjul, Gambia on January 21, 2017. Photo: Stringer/Anadolu Agency/Getty Images

Yahya  Jammeh, former president of Gambia has left Banjul, the capital to begin an indefinite term in exile. He left just after 10.00pm for Conakry, along with President Alpha Conde.

He was given a full ceremonial honour by the military brass band and a red carpet treatment. According to a journalist who witnessed the departure, some of his aides wept openly on the tarmac, while “others outside are still celebrating”.

His departure was confirmed by President Adama Barrow, now waiting in Dakar, Senegal to return home and start his government of ‘inclusiveness’ and transparency as he promised on Saturday.

“I would like to inform you that the 2nd President of the Republic of The Gambia, Yahya Jammeh has left Gambia. #Gambia,“ Barrow tweeted at about 10pm Nigerian time
Hordes of journalists and a battery of photographers had camped all day at the Banjul International Airport waiting for his departure, after an agreement was reached Friday night with President Alpha Conde of Guinea and President Abdul Aziz of Mauritania, for him to vacate power voluntarily.

The former soldier turned civilian leader held sway in the country for 22 years and had vowed to rule the country for a hyperbolic ‘billion years’ until he was thrashed in the presidential election by a political green horn, Adama Barrow.

It is not clear where Jammeh will end up eventually. He flew out with President Alpha Conde in an aircraft owned by Mauritania.

After landing in Conakry, Jammeh  may finally be heading to Malabo, capital of Equatorial Guinea, ruled  by another African pseudo democrat, Teodoro Obiang Nguema Mbasogo who has been in power since 1979.

Barrow succeeded Jammeh who lost in the December 1 2016 presidential election and refused to vacate office when his 22-year rule expired midnight on Thursday.

West African mediators spent several hours in talks with him on Friday after military forces of the Economic Community of West African States (ECOWAS) stopped actions to remove Jammeh by force to allow last-minute negotiations.

Jammeh, also on state TV announced that he would step down in the interest of the Gambian people adding that it was his duty to “preserve at every instant” their lives.

Barrow earlier said he was returning to his country once a security sweep had been completed.

He also told Gambians who had fled the country that they now had “the liberty to return home”.