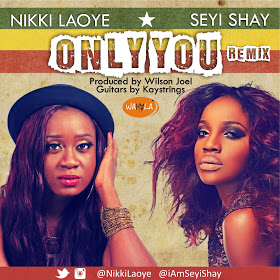 Nikki Laoye features RnB Singer, Seyi Shay on the remix of her award winning hit song, ONLY YOU

A song celebrating a Father’s Love and dedicated to the memory of Nikki’s Dad, the remix takes the song a notch higher from a ballad to a groovy reggae tune while maintaining the soul stirring aura that the original version is known for

Nikki Laoye sets the pace for the captivating song with her unique enchanting vocals & harmonies while Seyi Shay brings a new dimension & depth to the remix with her enthralling verse and exceptional vocal delivery – A Breathtaking Ode to the greatest father of all, GOD. With an unforgettable crescendo and their engaging chemistry, the duo take you on a soulful journey of a Father’s Unconditional Love ,leaving you breathless in the arms of a classic masterpiece for all times

“Only You” is a special song forever etched in the
heart of the soul singer,Nikki Laoye as its original version produced by Rotimi Keys, was a defining song in Nikki’s career when she returned to the music scene in 2013 after a brief hiatus. The song has won over 10 awards across Nigeria and Europe including 2013 Headies for Best Female Vocal Performance; 2014 AFRIMA Best African Female in Inspirational Music and 2014 AGMA Awards in the UK.

Talking about the remix, Nikki Laoye shares – “I just had to take the song to another level. The remix had been in the works as far back as early
2014 when I decided to recreate the magic once again with producer,Wilson Joel who simply created another mindblowing masterpiece with the addition of the wicked Guitars by my friend, singer/guitarist, KayStrings. I always wanted a new drive to the song and I just knew that Seyi Shay was the right person for the song as we had been planning to work on a song for a while now. Above all, there is nothing like being in tune with your collaborating artist, you are just on the same page with ease. I remember sitting in awe, right there in the studio that day as she sang her verse – she had no idea she had written the exact words in my heart and gave it back to me in a song. Seyi Shay definitely Rocks and The Remix totally rocks”