The Only Superstar is Jesus’: Kanye West Speaks at Joel Osteen’s Lakewood Church 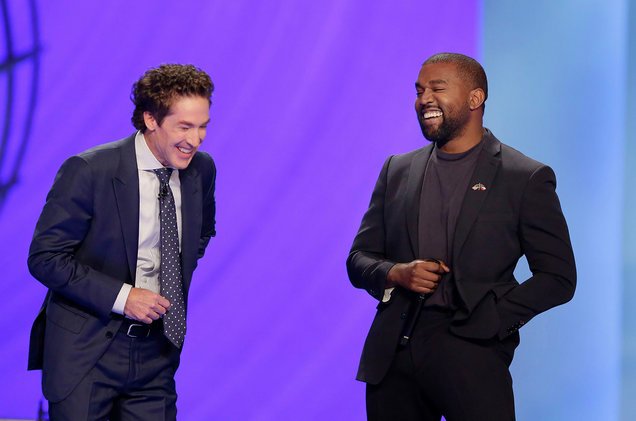 West was speaking during a live interview with Osteen today at the pastor’s 17,000-seat Lakewood Church in Houston. The two have been friends for some time and talked about West’s journey to faith, reflected in his new album, Jesus Is King, and his traveling Sunday Service, a quasi-religious music show

The 42-year-old West talked about his “journey to his faith for 20 minutes, and plans to return for an evening Sunday Service. 45,000 free tickets have been made available for the events. The concert/Sunday Service will be held in a spillover area of Lakewood Church that can accommodate larger crowds.

West said God gave him visions that led to his new album and the creation of Sunday Service
When I was in my lowest points, re with me and sending me visions and inspiring me. I remember sitting in the hospital at UCLA after having a breakdown and there’s documentations of me drawing a church and writing about starting a church in the middle of Calabasas,” he said. “Even after that I made the Life of Pablo album and said this is a gospel album. I didn’t know how to totally make a gospel album and the Christians that were around were too beaten into submission by society to not speak up and profess the gospel to me because I was a superstar. But the only superstar is Jesus,” he said.

“All of that arrogance, and confidence and cockiness that y’all seen me use before God is now using for Him,” West said, getting applause from the crowd. “Because every time I stand up, I feel that I’m standing up and drawing a line in the sand and saying I’m here in service to God and no weapons armed against me shall prosper.”

Osteen asked about worshiping fame and money, an ironic question, given the pastor’s focus on prosperity.

“It’s like the devil stole all the good producers, all the good musicians, all the good artists, all the good designers, all the good business people and said, “you gotta come over and work for me,” said West. “And now the trend, the shift, is going to change. Jesus has won the victory. Now the greatest artist God ever created is now working for him,” he added, dotting the comment with a smile.

“As I now have a family, I’m 42 years old and married for five years, there’s a blatant responsibility for me to become more like my mother, who has gone to heaven and more like my father, who is working in building a water purification center in the Dominican Republic.”

“Closed on Sunday (a track on the album) is the hardest record ever made because it’s talking about protecting your kids from the indoctrination of the media,’ West said.

Osteen asked what advice he’d impart to his younger self.