Dunsin Oyekan, Nathaniel Bassey & Others Reveals Why They Don’t Charge 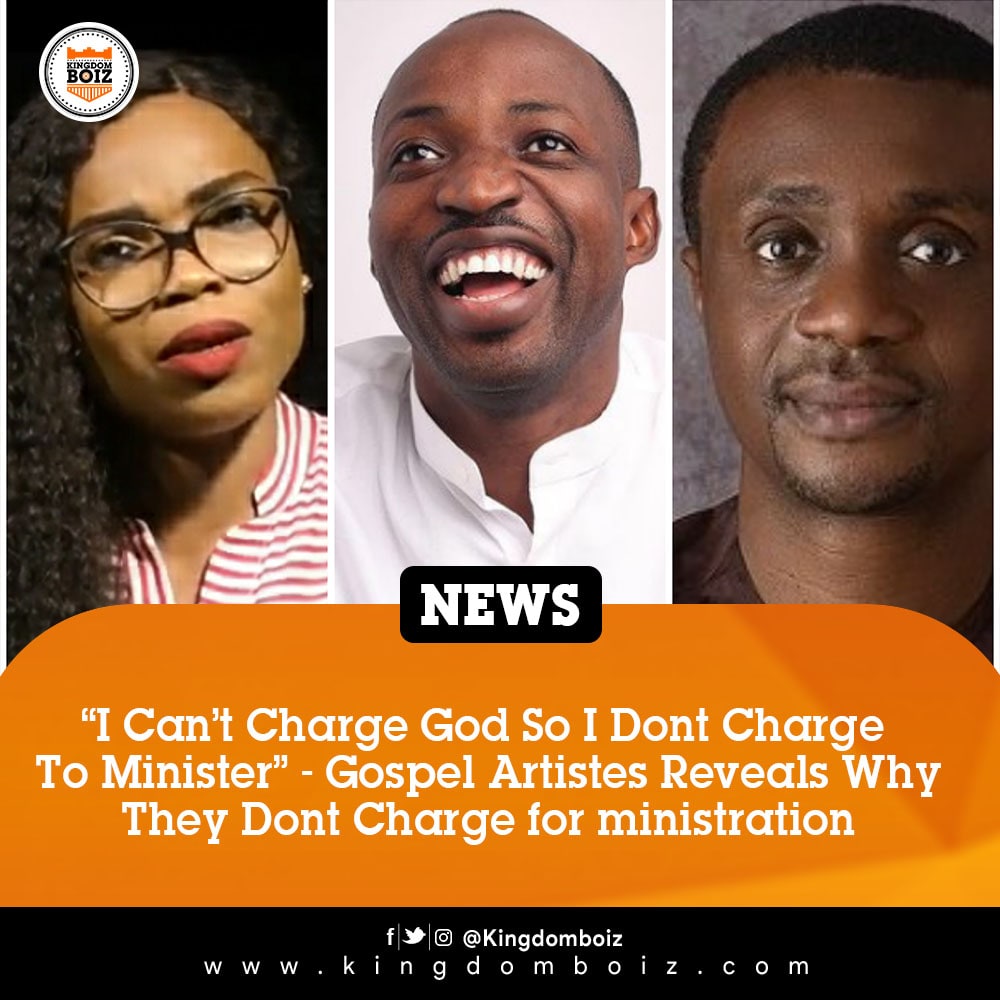 For me, the tokens of my doesn’t allow that I charge. I remembered God telling me, ‘the day you start charging, the well will dry up’. In as much as I don’t go into the why are you charging issue, everyone has his own dealings with God but my dealing with God doesn’t allow me.

The dimension of what He releases to me and the experiences I have with Him, Kingdomboiz. I am too grateful and that keeps me humble, I believe.

My father from the time I started playing the bass, he will school me scriptures and talk to me about charging, kingdomboiz. it was a major course, at a particular time, we had the best music in town because he is somebody who encourages music, if he spots you’re gifted, he will bring you close and train your life. One of the major lessons you can never miss around my father is charging, he will school you on why not. If I say let me charge is that really how much I am worth? I am worth more than that and then does that mean that if you don’t have it you don’t enjoy the grace of God? These are the things I consider when people talk about.

Once you start talking about money I may not come because I have had people who say…… Kingdomboiz I have a chat, recently, someone said I want you to come for a program, this is how much we have, I don’t go, that’s like a litmus test for me, that helps me. I believe my dealings with God, freely I have received, freely I should give and of course, people take it for granted.

I imbibe the principle of Jesus, you go anywhere you are not honoured, I may not come back and honour is not in money. I have gone to places and the Holy Spirit will tell me, don’t take one Kobo from here and out of my pocket I will make sure the team is okay, we do that a lot. Kingdomboiz. There is a way you communicate honour, you will want to come back.

God gave me this concept of Messenger, so when you say I should come minister in a place, the first question I ask is God, are you sending me to this place with a message? If I don’t have a message, there is no need to go because I am supposed to go and deliver something. If the One who called me says I don’t have a message for that place I just tell them sorry, I don’t feel led to come. That leads me when I want to take invitations and sometimes as you are telling me the Lord begins to tell me and I just see myself there, these are litmus tests for me.

When you called me for this meeting, I was in the prayer room earlier that day and somehow your name just came up and you called me in the evening so I said this is the reason why you called me so I knew I had to be here.kingdomboiz You don’t want to go where God doesn’t want you to go, that means you are going on your own and whatever happens, you have to defend His name yourself.

These are the things I consider before going for a meeting. People say they say that one bought you this…. you take time to confirm if you are coming, at least you must make time to hear from the One who sends us to come, I have noticed that most times these meetings never hold. kingdomboiz

I remembered the meeting I went for this morning, that was early in my training in going out. When the Lord doesn’t want me to go for a meeting and I take it, a night before I will just have malaria. As I went to the piano worshipping to shrug it off, I felt it again, as soon as I entered, the Lord said what are you doing here? Then they called me on stage, after five to six minutes they came and took the mic then I understood immediately, I was supposed to minister for twenty to twenty-five minutes. From that day I took it seriously to hear. Once I don’t feel like it, I don’t force myself, programs happen every year. Destiny is not a destination, it is an adventure, this is what guides me.

Ninety percent of the time I go based on instructions, if the Lord says go. The other part depends on relationship and when I go to a place I’m blessed, I am not talking about money but spiritually, I am blessed, I want to go back there. I most likely will go to a place I am blessed again and again and again because I am edified as well but ninety percent I will just wait because I am not in a hurry to go anywhere, kingdomboiz. I don’t believe I have anything to give if Jesus doesn’t give me, it is based on instructions.

I don’t charge based on instructions, the Lord says don’t. I say it to people, this thing comes with a lot of arguments between people and they will say if you say the Lord says you should charge please do it, if the Lord is not telling you, please don’t do it because we will all answer to the Lord so the one He is telling you to do, do.kingdomboiz God is not a liar, if you believe He says you should charge and you can back it up, please charge but if you don’t believe so, please stick to whatever God has said to do.

Paul says is it wrong that you minister to me in your canal gift. There is a balance to it so if somebody says I am led by the Spirit for Pastors here, you know it is my conviction, consecration to not discuss charges.

Why do I do that?
How much can I place on my gift?

I understand that my ministry is two fold, primarily to minister unto the Lord, that is the first calling of every minister and then to his people. The way it works as you minister to Him, He sings through you over His people, He rejoices over them in singing.

My understanding has always been if a church invites me to come minister, they are doing two things, first to minister to God and to His people. My own understanding is when you say to me come and minister to God, I can’t charge God to minister to Him. How much did He charge me for His Blood on the Cross of Calvary? The Blood that is the very reason for my ministry. It is a personal consecration and it has worked for me so why leave what is working?

If I share some of my testimonies, people will be jealous. I don’t want to go there. I am a living testimony by God’s grace of what it means to be on God’s payroll.

Three weeks ago, I felt led in my heart I wanted to bless some people, I don’t charge a dime but I gave two cars in one day. I bought it for my keyboard-player and my PA. I am trusting God very soon that I will start giving out houses. God has to use some people to show that He is a good God. I am saying this because I am in a good house, it is not an information I will like to share publicly.

My question is what has God called you? It is not about this person is doing this, this is right or wrong, it is about what He has called you to do, that determines your consecration. Are you just a Jew or a Nazarite like Samson. Look at what Samson did, he operated in an unparalleled level of power until he missed it.