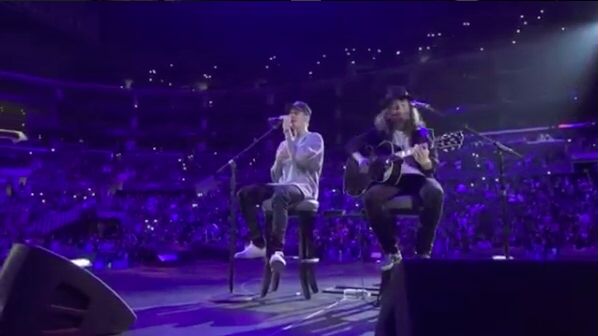 Recently, 21-year-old pop sensation Justin Bieber
made a stunning turnaround in his relationship
with Christ. In a soul-baring interview with
COMPLEX magazine, he said he was leaving behind
the tabloid headlines and had made dramatic turn
in his walk with Jesus.

In connection with the release of the singer’s new
album, “Purpose,” his sold-out concert at Staples
Center November 13 had a distinctly spiritual flavor, surprising many observers.

“What the vaguely billed event at Staples Center felt
most like was a church service,” reported Mikael
Wood, a reviewer for The Los Angeles Times.

Friday’s show started when Bieber rode his
skateboard to a smaller stage near the center of
the arena. He did an acoustic performance of
several new (and old) songs and premiered a film
highlighting each track from “Purpose” with
distinct dance numbers for each song.

“Between the skateboarding and the singing,
though, Bieber sat on a stool next to Judah Smith,
the man described as his pastor, and more or less
preached,” a surprised Wood noted in the Times.

Smith, 36, is lead pastor of The City Church in
Seattle, described as “a thriving multi-site church
noted for its

cultural relevance, commitment to biblical integrity
and faith, and love for Jesus.” He is also the author
of Jesus Is, a new book endorsed by Bieber.

Bieber’s mom, Pattie Mallette, stumbled upon
Smith’s sermons and met him for the first time at a
conference. She told Smith that his tapes put her
son to sleep and suggested the two meet each
other. While Smith didn’t consider the snooze effect
a compliment initially, his relationship with the pop sensation has developed and grown over time.

At Friday’s concert, “He (Bieber) credited his
connection with God for helping him to get back
on his feet after a string of widely publicized
tabloid troubles,” Wood reported in the Times.

At one point in the concert, a dozen pre-selected
fans were brought on the stage with Bieber for a
question-and-answer session. One young woman
asked him for advice in handling a romantic
breakup.

Following his epic break-up with Selena Gomez,
Bieber told COMPLEX magazine his heart began to
soften toward God. “Love is a choice. Love is not a
feeling. People have made it seem in movies that
it’s this fairy tale. That’s not what love is,” he noted.

“You’re not gonna want to love your girl
sometimes but you’re gonna choose to love her,”
he continued. “That’s something in life that I had to
figure out. I can’t lean on people. I got to lean on
God. I gotta trust in Him through all my situations.
Then, hopefully, my other relationships will flourish around me.”

The album cover for Bieber’s new album features
the shirtless young star, bent over in prayer, with a
cross painted on his stomach.

The penitent tone of “Purpose” is exemplified by
the song “Sorry,” as Bieber apologizes for his
troublesome antics and vows to change his ways.

“God sent an angel to help you out,” he sings in
“Life is Worth Living,” described by the Times as a
“delicate and beautifully sung piano ballad.”

Bieber sings about his Lord and Savior Jesus Christ:
“He gave you direction, showed you how to read a
map for the long journey ahead.”

According to Times reviewer Woods, “With
‘Purpose’ Bieber doesn’t just alter his message;
he’s transformed his sound too.”